The exhibition 'Commemorative Handkerchiefs and Postal Stamps' by O?uz Aydemir has been opened in the premises of the Turkish cultural center Yunus Emre, reports the Anadolu Agency.

The exhibition 'Commemorative Handkerchiefs and Postal Stamps' was opened in the premises of the Turkish Cultural Center Yunus Emre, in the presence of the Ambassador of the Republic of Turkey to the Republic of Croatia, Mustafa Babür H?zlan and Director of the Zagreb branch of the Yunus Emre Institute, Nurullah Yava?, the President of the Croatian-Turkish Friendship Association Goran Beus Richembergh, the author of the exhibition and a significant number of visitorsç

The original commemorative handkerchiefs and a series of postal stamps from the private collection of O?uz Aydemir have been exhibited.

Ambassador H?zlan found the exhibition original, beautiful and significant for the presentation of the Turkish culture in Croatia. He pointed out that the author of the exhibition and collector O?uz Aydemir is the true cultural ambassador of Turkey to Croatia. He also said that Aydemir has "an eye, especially for places where Turkish and Croatian culture and history touch each other." He announced that Aydemir, after a book about the Turkish bridge in Osijek, has been working on publishing a book about Antun Vrancic, who was a prominent Croatian and Habsburg diplomat during the negotiations with the Ottoman Empire. 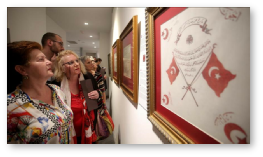